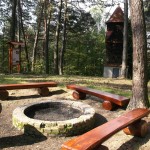 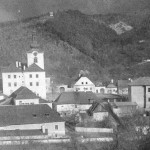 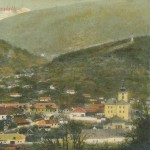 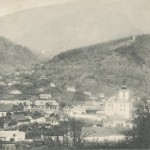 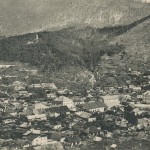 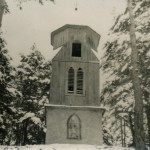 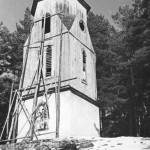 Owes its name to the reddish colour of rhyolite, from which the rock is built. Rhyolite, in the past wrongly called “the trachyte of Nová Baňa”, is an igneous rock which, by its composition, is equal to granite. Because rhyolitic lava is usually very viscous, natural formations made of rhyolite are often morphologically dominant and they stand out from the surrounding terrain. The age of rhyolites is estimated at 12 million years, to the geological era of Late Sarmatian.

In the region of Nová Baňa the rhyolites build mainly the distinctive massif of Háj (Himmelreich), as well as a number of smaller dykes and veins in the wider surroundings: in the massif of Chlm, Ťatiar and Agraš, between Rudnom nad Hronom and Pukanec. The rhyolites around Red Rock are often intensively hydrothermally altered, mainly close to the ore veins, which shows in the lighter colour shades – white, yellow, ochre to green colours, and also in a change in consistence into soft to plastic, and in higher susceptibility to weathering.

The Red Rock offers an interesting view of a part of town and on the eastern slopes of Pohronský Inovec, into the valley of river Hron, and of the ridge of Štiavnické hills, with the domineering hills of Ťatiar (734 m.a.s.l.) and Priesil (747 m.a.s.l.). It also offers a view over the area of Putikov hill, the youngest volcano in Central Europe, with the volcanic cinder cone and a plateau made of basanite lava flow (over the quarry).

It offers itself for some demanding climbing routes, with the difficulty level of 7+ – 10-, which are secured with pitons, rings, and rivets. A map of the routes can be found at www.james.sk.

In abundance here are plants such as Hen-and-chicks, Spider plant, or Lesser periwinkle. On the rocks, on a sunny day, we can observe a common lizard. From birds, we can hear the singing of tomtits, nuthatches, hawfinches and warblers.

Red Rock and Raven Rock give some of the nicest views into the valley of Hron, as far as the Gate of Slovakia, over the Štiavnické hills with the ridge of Veľký Žiar and Priesil, and on the slopes of Pohronský Inovec.

Morphologically prominent rhyolitic rock, on the historical maps marked as Rabenstein. The rhyolites of Nová Baňa are, time-wise and area-wise, closely related to the occurrence of ore veins. It can be said that rhyolitic volcanism was the direct cause for occurrence of ores of precious metals (gold and silver), and thus also for the existence of a mining town as such.

In the vicinity of Raven Rock, mainly in the andesitic rocks, a massive system of parallel veins was created – the stockwork Reissenschuch, intensively mined mainly in middle ages. The veins contained high-grade, so-called ‘select’ gold and silver ores. The many shallow surface pits – pings and open shafts around the site, as well as the galleries under the rock, in the valley called Finerňa, are witness to ancient mining. Close to Raven Rock, in the direction of Zvonička, is the open entrance to the Klingsbittner shaft, commonly called Stone shaft.

From the top of the rock there is a panoramic view over the massif of Chlm (726 m.a.s.l.) between Rudno nad Hronom and Brehy, in which is situated the Rudno ore deposit, intensively mined in the same medieval period as was the Reissenschuch stockwork.

Further we can admire the meanders of river Hron around Brehy and Tekovská Breznica, and the panorama of Štiavnické hills. It offers views of the ridge of Drastvica (834 m.a.s.l.) and Veľký Žiar (856 m.a.s.l.) and to the E and SE over the western part of Štiavnické hills as far as the Gate of Slovakia. On the right, the valley of Hron is bordered by the eastern slopes of Pohronský Inovec.

Over the valley of river Hron, there are oak and hornbeam groves of the Querceto – Carpinetum type. Apart from common hornbeam, also two kinds of oak – the English oak and the Cornish oak, grow here. Scarcely, also the Turkey oak and the Downy oak can be found here.

The route then continues via a small descend, and joins a forest road which was earlier used for bringing millstones to town. With a mild rise, it will lead us to Háj, where we can look around the quarry creating a beautiful stone amphitheatre.

Is one of the nicest lookout locations on the route of the educational path, with the highest point of 625 m.a.s.l.

The peak of Háj (712 m.a.s.l.) is built from relatively fresh rhyolites, which have not been subject to intensive hydrothermal alterations. The properties of such rhyolite, mainly its hardness, firmness, and resistance to abrasion, made it ideal as quality raw material for making millstones. This has a tradition in Nová Baňa, as long as the precious metal mining. The properties of rhyolite for this purpose were also improved by the many jasper veins of centimetre thicknesses.

Rhyolite was exploited here in several quarries and was roughly processed in situ. Traces of production can be seen till today. Such semi-products were carried into the town, where they were given their final shape in the stone-cutting workshops. Around 1850 the First Mining Co. of Nová Baňa was created for the production of millstones. After its end, from 1893 the production was continued by Novobanská millstone factory, which supplied stone for building of roads, bridges, railways, and tombstones (the former building by the free-time activity centre). After WWI, the production of millstones was discontinued. Apart from millstone production, rhyolite was, and still is, used widely as building material, mainly in connection with building roads (supporting and stabilizing road walls, pillars of bridges etc.).

The sharp ridge of Háj, in the direction from the quarries to the Raven Rock and Red Rock, offers a number of morphologically interesting rock formations – widespread natural rhyolitic outcrops and debris – stone seas, visible even from the valley of Hron.

From the edge of the massif, a view opens over a part of the town and the Nová Baňa valley, and from the west on the ridge of Pohronský Inovec, with the distinctive peaks of Viničný hill and Saddle rock.

The massif of Háj is overgrown with oak and beech trees, and in places with pine and acacia.

From the animal kingdom, the occurrence of lynx is of interest. We can find here some protected fauna, such as the Fire salamander , the Grass snake, the Wall lizard, and in the older growth the stag beetle. A lot of common birds live in the forest. Interesting are the protected plants of European bladdernut or White helleborine.

This pilgrim place started to write its history in 1863 when, at a time of great drought, a sheep dug up a water spring with its hoof. Later the people of Nová Baňa discovered also its healing powers, a talk of apparitions started and religious processions – pilgrimages followed, coming here to pay homage to the immaculate Virgin Mary. A ‘Marian society’ was started in the town, whose aim was to look after this place and make it nicer. Thanks to townsman Georg Nemčok, a statue of the hallowed Virgin Mary was built, which was consecrated on 3 September 1865 by the local parish priest Alexej Peťko. In June 1866, the bishop of Banská Bystrica, Štefan Moyzes declared Kohútovo a gracious place. In 1869 a new neo-gothic chapel was built from the gifts of the pilgrims. The foundation stone of the chapel was consecrated on 17 May 1869. The finished chapel was consecrated on 12 September 1869. It is surrounded by a small botanical garden.

On the site grows a precious and rare specimen of a giant sequoia which is 34 m tall.

Traditionally, pilgrimages related to the Marian holiday take place here in May and in September .

On the occasion of the 150th anniversary of its creation, the pilgrim place was newly renovated and a rosary way and a relief, and double cross of St. Cyril and Method were added.